Stay up to date with our work. See backstage shots, work in progress, stories from events, our latest shows and exciting ideas.

Co-founder and director Laurane Marchive also performs under the name Lily Raptor. She has been on stages across the UK, Europe and Middle East as a solo performer and leads our hula hoop troupe The Starship Hoopers. As well as hula hoop she performs as a contortionist. Her signature move combines these elements, in a bridge position with one leg in the air she keeps a hula hoop rotating around her foot.

Haymarket events asked Chivaree Circus to partner with them on their summer Event 360, where they bring together various event partners to talk about trends in the industry. As the event was being held at the iconic and beautiful Roundhouse in Chalk Farm, we decided this would be the perfect location to attempt a world record for the most amount of rotations in a minute while in this position.

After weeks of rehearsal and training, we brought a team of two independent experts and witnesses. In order to get the record Laurane had to get over 120 rotations (2 a second). She smashed the target getting 132 and setting a new Guinness World record. The audience voted it the most enjoyable and exciting part of the day.

Many of our performers have achieved world records and a few of our performers have several, but this is Laurane’s first and she is now “officially amazing”. It was wonderful to break this record at such an exciting venue, where some of the best shows and performers from around the world have been on stage. In the past we have attempted world records at major launch events to bring additional publicity and press engagement. Get in touch to find out what is possible. 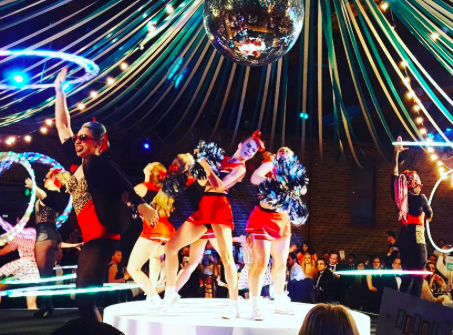